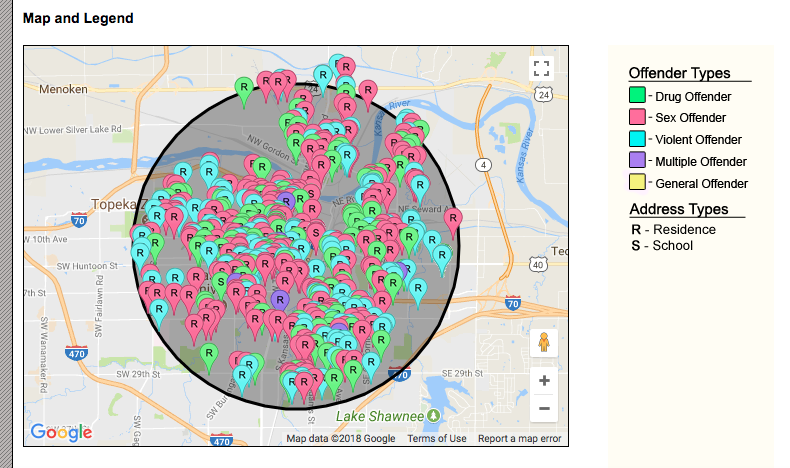 Most everyone is familiar with the Sex Offenders Registration list in their state. It’s a mindful tool that conscience parents use to keep their children safe and enlighted of the dangers that may live in the near vicinity of their home. There are countless apps and websites devoted to updating neighborhoods of the new neighbor on their street, their previous crimes and time served in prison. It’s an uncomfortable necessary part of our lives today.

But little known to those outside of the state of Kansas, there is also a registry for drug convicted criminals in the sunflower state. Under Kansas state law, having a drug conviction means that the guilty party’s crimes are required to be listed in a public registry that includes their photograph and other identifying details that are on display for all to see. Searching websites like “Sex Offender Spy” or “Offender Spy” will bring up Kansas residents information, where strangers become public judges, while drug addiction is classified as a disease according to the Substance Abuse and Mental Health Services Administration in the United States.

The sex offender list has an easy justification, protect the children of being potential abuse victims to dangerous and violent criminals. But what justification does the drug registry hold? To allow strangers to silently judge and hold prejudice against past offenders before ever knowing the fine details that usually hold more weight than the short paragraph displayed on a computer screen?

Kansas is one of many states with multiple registries, for a range of different crimes on display for the public. Tennessee has a rightful registration for convicted animal abusers. Utah exposes white collar criminals. Montana requires people convicted of homicide, assault with a weapon, aggravated assault, kidnapping, arson and robbery to register their information. Five states publicly disclose methamphetamine producers. And yet, somehow talks of adding registry lists for hate crimes and domestic abusers in other states were abandoned.

Kansas passed the law in 2007, which states that anyone convicted of “manufacturing, distributing, or possessing ‘with intent to distribute’ drugs other than marijuana” to remain on the list for at least 15 years. While registered, offenders must appear at their county sheriff’s office four times a year for check ups, as well as when they move, get a new job, email address, vehicle or tattoo. The registry is accessible to the public, where one can sign up for emails that alert you when an offender moves in or starts work near them. Due to businesses being worried that vigilantes would target them for hiring prior criminal, lawmakers removed the employment addresses from the website.

Those who are on the list have a hard time finding employment, as with most applications you are asked if you have ever been a felon before. With the registry, employers in Kansas don’t even have to ask, they can find out through the world wide web. Registrees suffer from poor job prospects. On top of employment issues, prior offenders are also exposed to the blind judgements from complete strangers and used against them.

But law enforcement officials are quick to support the registry by claiming public safety. “People who sell drugs, there tends to be dangerous activity that takes place around their residence,” said Ed Klumpp, a retired Topeka police chief who lobbies for law enforcement at the legislature and opposes the current bill. “If you’re raising children in the neighborhood, it’s good to know there is someone down the street convicted of selling or manufacturing, so maybe they won’t send the kids to get candy there on Halloween.”

But in recent years more and more lawyers around the country have argued against the registration lists, calling them unconstitutional. A county in Colorado removed their registry from online access after a judge declared it cruel and unusual punishment. California went a step further and allowed sex offenders to be removed from the registry after 10 to 20 years if they had not been convicted of another serious felony or sex crime.

There is little proof that these registries, albeit the sex offender registries, reduce crime. Others argue it may bolster it when it comes to someone looking to connect with known drug dealers. University of Michigan law professor J.J. Prescott has speculated that they may even facilitate crimes that involve buyers and sellers. “Imagine I move to a new city and I don’t know where to find drugs,” he said. “Oh, I can just look up people on the registry!”

Registries that include violent crime can be an important tool to public safety. Although drug offenders can range from mentally ill to victims of their substance abuse disorder. One could argue that while addiction is classified as an illness, there no registries that require Bi-Polar or depressed people to participate. For those looking to disassociate themselves from prior drug users, the list only classifies their history but does not tell their entire story, nor their future. One could argue that judgment should be reserved on a person’s merit, not their previous discrepancies.