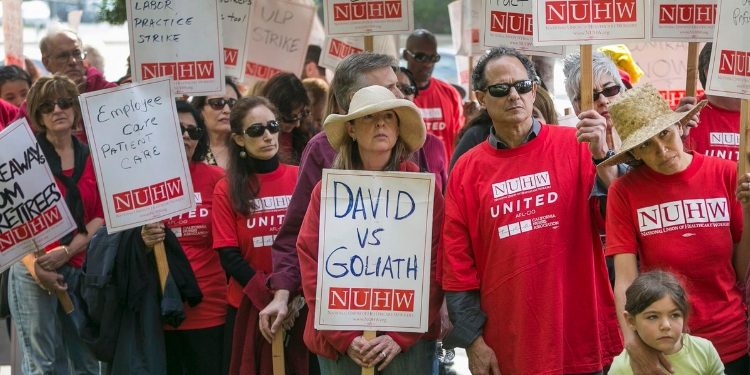 A five-day strike has begun Monday Dec. 10, with thousands of Kaiser Permanent mental health workers staging pickets around California and drawing attention to what they call the worst staff shortage and critical unequal benefits.

Around 4,000 psychologists, social workers, therapist, nurses and other medical professionals represented by the national union of healthcare workers will strike through Friday, Dec 14th, as stated by the union.  Due to the mass number of workers striking mental health care appointments during this week may be canceled, however, the union president says the strikes are in the long-term best interest of patients, who currently have to wait a month or more for follow-up mental health appointments due to low staffing.

Sunday a statement by Sal Rosseli , the union’s president, said they “They’ve canceled appointments for these five days, but there’s a critical situation every day of the year.” She also argued that Kaiser needs to hire hundreds of more clinicians to handle what he believed to be “access crisis” for all involved.

Mental health workers want the same benefits and pensions as roughly 100,000 other Kaiser employees-which include medical and facility staff workers.

A spokesperson for Kaiser characterized the strike as “unfortunate” and “unnecessary” during a press conference Sunday. Michelle Gaskill-Hames, Kaiser’s chief nurse executive said, “We believe that this strike is a bargaining tactic, it’s not about access, it’s not about better care,” she argued, “It is really about them pushing for higher wages.”

She released a statement that same day saying, “We know we have a shortage of mental health workers across this country, and over the last five years, we have been leaning in very heavily to build a world-class mental health services program,” highlighting the fact that California Office of the Patient Advocate awarded Kaiser Permanente Northern California received its highest rating of five stars for behavioral health this year.

Despite the striker’s efforts, Kaiser said its medical centers and medical offices are scheduled to remain open during the whole display, including their hospitals, emergency, and urgent care rooms, as well as primary and specialty departments.

A statement from Kaiser said “Some non-urgent mental health and other appointments may need to be rescheduled. Any patients who are affected will receive a personal phone call from a Kaiser Permanente staff member.”

Expressing “Anyone in need of urgent mental health or other health care will receive the services they need.”

Negations have been flowing between the union and Kaiser since June, talk of more bargaining sessions set for later this week, according to Kaiser.

Similar issues took place four other times between 2012 and 2015, with mental health works going on strike at Kaiser, Rosselli said.

Back in 2015 around the same time, the threat of a strike was avoided when the union and Kaiser agreed to a contract, which included promises to hire hundreds of clinicians to increase the care surrounding mental health.

Since then Kaiser has hired hundreds more mental health professionals since then, however, the patient care and access has stayed the same or worsened as the health care provider has expanded its client base significantly and some caregivers have quit.

Gaskill-Hames claims the union wants Kaiser’s “mental health professionals to spend less time with our patients, and not more,” which would “impact access negatively.”

Rosselli called that an “outrageous manipulation” and argues doctors want to spend all the time needed with follow-up work after an appointment, such as notifying parents and family, school or employers about their health need. He ensures Kaiser has a higher moral standard.

Gaskill-Hames said in a comment regarding the strike, “we’re very disappointed that they’re bringing our patients into the middle of this.” He said, “We feel like these conversations should be happening at the bargaining table.”